After the break-up, Strummer contacted Jones in an effort to reform the Clash. Jones, however, had already formed a new band, Big Audio Dynamite (B.A.D.), that had released its debut late in 1985. The two did work together on their respective 1986 projects. Jones helped out with the two songs Strummer wrote and performed for the Sid and Nancysoundtrack. Strummer, in turn, cowrote a number of the tracks on the second B.A.D. album, No. 10, Upping St., which he also co-produced.[80] With Jones committed to B.A.D., Strummer moved on to various solo projects and screen acting work. Simonon formed a band called Havana 3am. Headon recorded a solo album, before once again spiraling into drug abuse. Chimes drummed with a succession of different acts.

On 2 March 1991, a reissue of "Should I Stay or Should I Go" gave the Clash its first and only number 1 UK single. That same year, Strummer reportedly cried when he learned that "Rock the Casbah" had been adopted as a slogan by US bomber pilots in the Gulf War.[84]

In 1999, Strummer, Jones and Simonon cooperated in compiling of the live album From Here to Eternity and video documentary Westway to the World. On 7 November 2002, the Rock and Roll Hall of Fame announced that the Clash would be inducted the following March.[85] On 15 November, Jones and Strummer shared the stage, performing three Clash songs during a London benefit show by Joe Strummer and the Mescaleros.[75] Strummer, Jones and Headon wanted to play a reunion show to coincide with their induction into the Hall of Fame. Simonon did not want to participate because he believed that playing at the high-priced event would not have been in the spirit of the Clash. Strummer's sudden death from a congenital heart defect on 22 December 2002 ended any possibility of a full reunion. In March 2003, the Hall of Fame induction took place; the band members inducted were Strummer, Jones, Simonon, Chimes and Headon.[75]

In early 2008, Carbon/Silicon, a new band founded by Mick Jones and his former London SS bandmate Tony James, entered into a six-week residency at London's Inn on the Green. On opening night, 11 January, Headon joined the band for the Clash's "Train in Vain". An encore followed with Headon playing drums on "Should I Stay or Should I Go". This was the first time since 1982 that Headon and Jones had performed together on stage.[86] 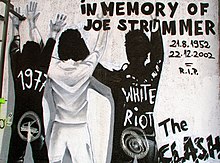 Jones and Headon reunited in September 2009 to record the 1970s Clash B-side "Jail Guitar Doors" with Billy Bragg. The song is the namesake of a charity founded by Bragg which gives musical instruments and lessons to prison inmates. Jones, Headon, and Bragg were backed by former inmates during the session, which was filmed for a documentary about the charity, "Breaking Rocks."[87] Simonon and Jones were featured on the title track of the Gorillaz album Plastic Beach in 2010. This reunion marked the first time the two performers had worked together in over twenty years. They later joined Gorillaz on their world tour for the remainder of 2010.[88]

In July 2012, Strummer's daughters, Jazz and Lola, gave a rare interview to discuss the upcoming tenth anniversary of their father's passing, his legacy and the possibility of a Clash reunion had their father lived. Jazz said "There was talk about the Clash reforming before he died. But there had been talk for years and years about them reforming. They had been offered stupid amounts of money to do it, but they were very good at keeping the moral high ground and saying no. But I think if Dad hadn't died, it would have happened. It felt like it was in the air."[89]

On 9 September 2013 in the UK (and a day later in the US), the Clash released Sound System, a twelve-disc box set featuring their studio albums completely re-mastered on eight discs with an additional three discs featuring demos, non-album singles, rarities and B-sides, a DVD with previously unseen footage by both Don Letts and Julien Temple, original promo videos and live footage, an owner's manual booklet, reprints of the band's original 'Armagideon Times' fanzine as well as a brand new edition curated and designed by Paul Simonon and merchandise including dog tags, badges, stickers and an exclusive Clash poster. Both Mick Jones and Paul Simonon oversaw the project including the re-masters. The box set came in a package shaped as an 80s ghetto blaster. The box set was accompanied by 5 Album Studio Set, which contains only the first five studio albums (excluding Cut the Crap), and The Clash Hits Back, a 33-track, two-CD best of collection sequenced to copy the set played by the band at the Brixton Fair Deal (now the Academy) on 19 July 1982.[90][91]

In a 3 September 2013 interview with Rolling Stone, Mick Jones discussed the band reuniting saying it likely would have never happened. Jones said "There were a few moments at the time I was up for it (Hall of Fame reunion in 2003), Joe was up for it. Paul wasn't. And neither, probably, was Topper, who didn't wind up even coming in the end. It didn't look like a performance was going to happen anyway. I mean, you usually play at that ceremony when you get in. Joe had passed by that point, so we didn't. We were never in agreement. It was never at a point where all of us wanted to do it at the same time. Most importantly for us, we became friends again after the group broke up, and continued that way for the rest of the time. That was more important to us than the band". Jones also stated that the Sound System box set was the last time he will ever be involved in the band's releases. "I'm not even thinking about any more Clash releases. This is it for me, and I say that with an exclamation mark." Jones said.[92]

On 6 September 2013 the three surviving members of the classic lineup (Mick Jones, Paul Simonon and Topper Headon) reunited again for an exclusive BBC Radio 6 Music show to promote their legacy and the release of Sound System.[93]

In an October 2013 interview with BBC 6Music, Jones confirmed that Strummer did have intentions of a Clash reunion and in fact new music was being written for a possible album. In the months prior to Strummer's death, Jones and Strummer began working on new music for what he thought would be the next Mescaleros album. Jones said "We wrote a batch – we didn't use to write one, we used to write a batch at a time – like gumbo. The idea was he was going to go into the studio with the Mescaleros during the day and then send them all home. I'd come in all night and we'd all work all night." Jones said months had passed following their work together when he ran into Strummer at an event. Jones was curious as to what would become of the songs he and Strummer were working on and Strummer informed him that they were going to be used for the next Clash album.[94]