In August and September 1979, the Clash recorded London Calling. Produced by Guy Stevens, a former A&R executive who had worked with Mott the Hoople and Traffic, the double album was a mix of punk rock, reggae, ska, rockabilly, traditional rock and roll and other elements possessed of an energy that had hardly flagged since the band's early days and more polished production.[62] The title of the track also happened to be heavily influenced by the BBC World Service call signal and the panic that resulted in Three Mile Island nuclear scare.[63] It is regarded as one of the greatest rock albums ever recorded.[64] Its final track, a relatively straightforward rock and roll number sung by Mick Jones called "Train in Vain", was included at the last minute and thus did not appear in the track listing on the cover. It became their first US Top 40 hit, peaking at number 23 on the Billboard chart. In the UK, where "Train in Vain" was not released as a single, London Calling's title track, stately in beat but unmistakably punk in message and tone, rose to number 11—the highest position any Clash single reached in the UK before the band's break-up.

Released in December, London Calling hit number 9 on the British chart; in the United States, where it was issued in January 1980, it reached number 27. The cover of the album, based on the cover of Elvis Presley's self-titled 1956 debut LP, became one of the best known in the history of rock.[61] Its image, by photographer Pennie Smith, of Simonon smashing his bass guitar was later cited as the "best rock 'n roll photograph of all time" by Q magazine.[65][66] During this period, the Clash began to be regularly billed as "The Only Band That Matters". Musician Gary Lucas, then employed by CBS Records' creative services department, claims to have coined the tagline.[67] The epithet was soon widely adopted by fans and music journalists.[68] 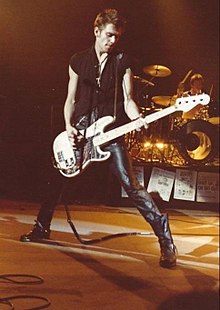 Paul Simonon of the Clash performs at the Palladium, September 20, 1979. (Photo: S. Sherman)

Around the turn of the year, the band members attended a special private screening of a new film, Rude Boy; part fiction, part rockumentary, it tells the story of a Clash fan who leaves his job in a Soho sex shop to become a roadie for the group. The movie—named after the rude boysubculture—includes footage of the band on tour, at a London Rock Against Racism concert, and in the studio recording Give 'Em Enough Rope. The band was so disenchanted with it that they had Better Badges make buttons that declared "I don't want RUDE BOY Clash Film".[69] On 27 February 1980, it premiered at the 30th Berlin International Film Festival,[70] where it won an honourable mention.[71]

The Clash had planned to record and release a single every month in 1980. CBS balked at this idea, and the band came out with only one single—an original reggae tune, "Bankrobber", in August—before the December release of the 3-LP, 36-song Sandinista! The album again reflected a broad range of musical styles, including extended dubs and the first forays into rap by a major rock band. Produced by the band members with the participation of Jamaican reggae artist Mikey Dread, Sandinista! was their most controversial album to date, both politically and musically.[72] Critical opinion was divided, often within individual reviews. Trouser Press's Ira Robbins described half the album as "great", half as "nonsense" and worse.[73] In the New Rolling Stone Record Guide, Dave Marsh argued, "Sandinista! is nonsensically cluttered. Or rather seems nonsensically cluttered. One of the Clash's principal concerns ... is to avoid being stereotyped."[74] The album fared well in America, charting at number 24.[75]

In 1981, the band came out with a single, "This Is Radio Clash", that further demonstrated their ability to mix diverse influences such as dub and hip hop. They set to work on their fifth album in September, originally planning it as a 2-LP set with the title Rat Patrol from Fort Bragg. Jones produced one cut, but the other members were dissatisfied. Production duties were handed to Glyn Johns, and the album was reconceived as a single LP, and released as Combat Rock in May 1982. Though filled with offbeat songs, experiments with sound collage, and a spoken word vocal by Beat poet Allen Ginsberg, it contained two "radio friendly" tracks. The leadoff single in the US was "Should I Stay or Should I Go", released in June 1982. Another Jones feature in a rock and roll style similar to "Train in Vain", it received heavy airplay on AOR stations. The follow-up, "Rock the Casbah", put lyrics addressing the Iranian clampdown on imports of Western music to a bouncy dance rhythm. (The singles were released in the opposite order in the UK, where they were both preceded by "Know Your Rights".) The music for "Rock the Casbah" was composed by Headon, who performed not only the percussion but also the piano and bass heard on the recorded version.[76] It was the band's biggest US hit ever, charting at number 8, and the video was put into heavy rotation by MTV. The album itself was the band's most successful, hitting number 2 in the UK and number 7 in the US.